My Home – Planning The Last Phase of the Garden

This is going to be the year of the garden. I’ve decided it’s high time it was finished. We’ve been chipping away at the hard landscaping for three summers now and what with one thing (hell, we bought and renovated a cottage in the meantime), and another (the house needed decorating too, damn it!) it’s taken longer than anticipated. But my patience is now wearing thin. Another winter with the dog traipsing in mud every time he spends a penny, has convinced me to bring in the professionals. But being the control freak that I am, I can’t leave the design up to anyone else. I may not be a garden designer but I know from bitter experience that if you don’t sweat the small stuff you won’t be happy with the results. So for the past few days I’ve been teaching myself garden design with a nifty online tool.

Before I reveal the master plan, I’d better explain where we’re at. For reasons of convenience we’ve started at both ends, leaving the middle pretty much untouched. And that’s the bit that we now need to tackle. I’m too ashamed to even show you a photograph of our sorry looking lawn. I did show some of it last summer when I shared ‘my garden style‘, but I have to confess, that lawn was a tad retouched. Correction. It was heavily retouched.

Phase one was what we now call the dining deck. It’s behind the garage and originally we were going to build a large kennel there for the dog. That was before we met our dog and found out that he ain’t no kennel dog! So now it’s where we have the barbecue, table and two benches. It’s very sunny and quite secluded so it works pretty well when there’s no more than four people and we’re not experiencing a heatwave. When there’s a crowd the table has to move to the centre of the garden, as above. Same when it’s a heatwave because there’s not the room for a big enough parasol on the deck and it would be so close to the barbecue it might actually catch fire.

The ‘Dining Deck’ as seen from ‘The Pergola‘

Phase two was the building of the pergola, which actually took two summers as we stopped to renovate the cottage. We desperately needed some shade in the garden which previously had none. Have you ever tried to get eight people under a normal sized parasol? The garden was just lawn, fence, and a tiny bit of paving when we moved in, so a fairly large structure was needed not just for shade, but for something other than fence to look at.

The newly finished pergola in 2016

Phase three I snuck in at the end of last summer and involved enlarging the patio immediately outside the house. The builders had left us with a postage-stamp-sized patio that wasn’t big enough for anything. The outside tap which is on the outside wall of the house was over a small patch of turf and as you can imagine that turned to mud very quickly. And the patio chairs took up the remainder of the space. I need room for pots! With no flower beds we desperately needed some green growing things. 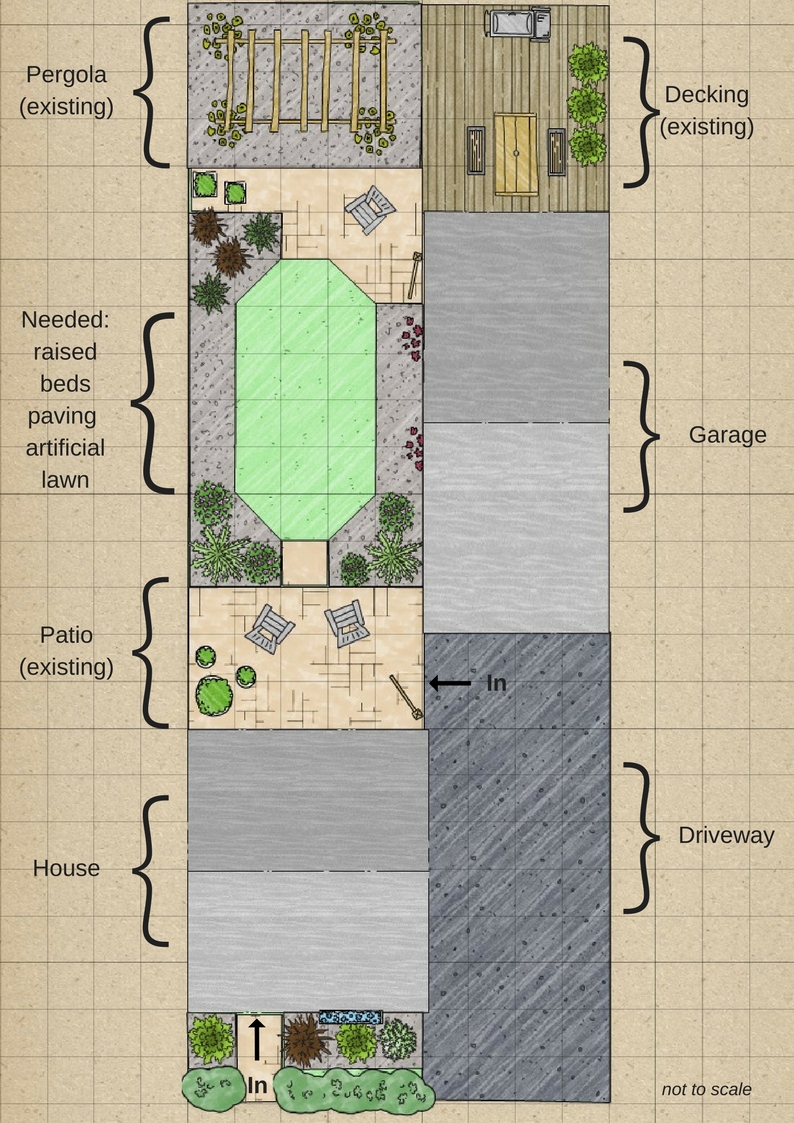 Well, phase four hasn’t happened yet. Yet.  And I don’t necessarily advise tackling a garden in this way. In fact I don’t. We’re now left with a lot of compromises. We don’t want to undo anything that’s already been done so we just have to work with the space that’s left.

1) Raised beds for plants. Green things just don’t do that well in containers and the soil we have is poor to non-existent. I’m looking at a lot of very sorry looking specimens out of the window and I know that it could look so much better. I imagined that the pergola would be rampant with climbers by now but it’s just not the case. I know the existing ones will look better by the height of the summer but I want them to look good all year round. The BF even bought a grapevine which was probably our biggest disaster to date. I also like the look of raised beds if I’m honest.

2) An artificial lawn. Fellow dog owners will know that dogs and lawns do not go together, but I can’t imagine having a garden that consists only of hard paving. I need to see green even if it’s not real. Getting it to look good is one of our next challenges.

3) Some more paving to bring all these elements together. And here’s the crux. Our garden is not big enough for lots of sinuous curves and hidden surprises. So it’s going to be a more formal garden. Luckily I rather like symmetry. But there’s a garage door to consider so it’s not going to be 100% symmetrical unfortunately.

I still have to make decisions about what kind of raised beds? How high? What will the lawn be edged with? Actually I’m thinking red brick for that – like the house and garage. How much is it going to cost to fill those beds with lovely plants? What happens (eeek) when the professionals question all my decisions? My measurements? My expectations?

This is the bit that needs attention in isolation.

So now I’m bracing myself for the raised eyebrows when I show this to a garden landscaper. And then I’ll show him the cardboard templates for the raised beds. They might get a few laughs. And it may get tweaked a few times before the final plan but I’m pretty happy with it.

MY VERY OWN PERFECT PERGOLA – REVEAL

TURNING A NEW-BUILD GARDEN PLOT INTO A WELCOMING OASIS

A Touch of Spring and Mother’s Day Gift Ideas