Yes, I’m just back from a three day visit to New York. Not my first time. But it was a first for the BF, so the agenda was to see as many sights as we could squeeze in without collapsing in a heap. Or more importantly without hitting the credit cards so badly that we can’t afford another holiday for at least three years. It’s not easy, but there are lots of things to do in New York that don’t cost a penny. And yes, you do have to pay for some things but if you choose wisely it won’t cost the earth.

Our first decision was to ignore all of those tourist places that offer you a three day ticket that will allow you access to practically anything without extra charge. For a mere $199 each. Did we even want to go to all of those places? And did we want to rush around making sure we didn’t waste a minute anywhere else that didn’t take advantage of our free pass? No. Easy decision to make. You might find those passes good value, but we wanted to take our time and keep our plans fluid. And when we totted up how much we had spent at the end of the three days, those passes would have left us out of pocket anyway.

The Manhattan Skyline from The Brooklyn Bridge

Without any particular plan in mind we just took the subway from our mid-Manhattan hotel downtown. The BF wanted to see Wall Street and from there we wandered down to the river and past the South Street Seaport to the Brooklyn Bridge. It’s well worth crossing the bridge on foot (and it’s free!) to get a perspective of the city from the other side. Some of my favourite photographs were taken that morning and it did help that we had the most fantastic blue skies to set them off. It also gave us our first glimpse of the Statue of Liberty, but more of that later. 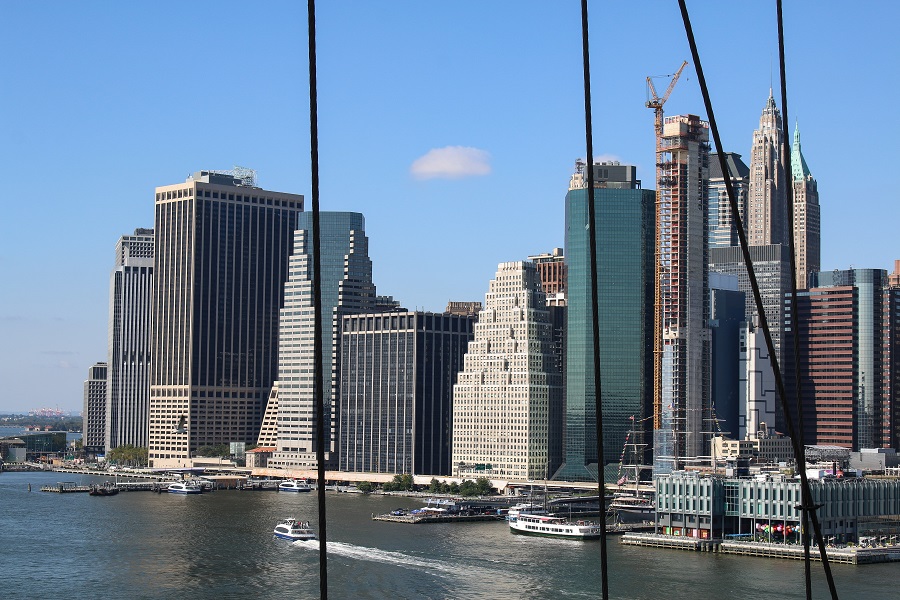 View of the Financial District from The Brooklyn Bridge

Returning across Brooklyn Bridge and a few blocks to the other side of City Hall Park is the site of the World Trade Centre and the 9/11 Memorial. On my first visit to New York (many years ago) I did go to the top (I can’t remember which tower) and it was somewhere we both wanted to visit. The 9/11 Memorial occupies approximately half of the 16-acre site once occupied by the World Trade Centre. The two enormous waterfalls and reflecting pools, each about an acre in size, are set within the footprints of the original Twin Towers and around the edges are all the names of the people who died that day. Prepare to be moved. Its design conveys a spirit of hope and renewal, and creates a contemplative space (there are more than 400 trees surrounding the reflecting pools) separate from the usual sights and sounds of a bustling city.

Do visit the museum. The queues are long and yes, you have to pay, but it is well worth it. Apparently all proceeds go towards keeping the museum and memorial up and running, just in case you think that this is not something that should be charged for. Inside you get a real sense of the horror as the day unfolds in graphic detail. I found the voice recordings the hardest. The many people who phoned loved ones to say goodbye. And the photographs. And the stories of the firemen who perished.

View from The Staten Island Ferry

After the museum we wandered down to Battery Park to take the Staten Island Ferry. Last time I did this there was a charge. Now it’s free! The sun was going down and although the Statue of Liberty is some way off, it’s a great way to see it, and also a great way to get a view of the tip of Manhattan. A bit of a ‘Working Girl’ moment. In fact everywhere you go you can remember a scene in a film (or should I say movie?).

Day two did involve a fair bit of leg work. Buy hey, it was Sunday and the sun was still shining. We walked down Fifth Avenue, past the Empire State Building, past Madison Square Gardens and the Flatiron Building, past Union Square (where there was a massive aerobics workout going on) and down to Washington Square Park (where there was a band and dancing). Just before the park is Washington Mews which is a little step back in time with cobbles, pretty houses and window-boxes.

Unbelievably we then continued walking via Soho to the Hudson River Park and its great view across the Hudson to New Jersey. After a pit-stop it was on to Chelsea Market and The High Line.

View of the Hudson and New Jersey

View from The High Line

The High Line is a 1.45-mile-long elevated linear park, garden and rail track created on a former New York Central Railroad spur. This green space offers unparalleled views of Manhattan’s far west side. With places to sit and people-watch, patches of grass, seasonal blooms and fascinating architectural features along the way, it’s a great place to relax. I was there a few years ago and since then the gardens have matured and cafes have sprung up. It was busy, as you would expect on a sunny Sunday, but everything we did this day just made us feel less like tourists and more like New Yorkers enjoying the weekend.

The Empire State Building from The High Line

View from the water

Day Three – Take To The Water

It would be a shame to visit New York and not go on some sort of cruise. So we took the Circle Line Landmarks Cruise which takes in the most famous NYC landmarks on both the Hudson and East Rivers, plus breathtaking views of Manhattan’s downtown skyline. The weather wasn’t quite so sunny so my photographs are a little on the grey side. But hey, that’s New York. And it was great to listen to a New Yorker telling us amusing anecdotes along the way.

Brooklyn Bridge from the water

One World Trade Centre from the water

A fitting end to our hectic three days was a trip to the top of the Empire State Building. Another movie moment. This time ‘Sleepless in Seattle’. It was cloudy and the sun was low in the sky, but if you’ve never been it’s not to be missed. Try to go on a Monday at around 4pm. There were no queues!

From the top of The Empire State Building

The Chrysler Building from the top of The Empire State

I have to say we walked a lot. That’s not for everyone. The subway is cheap compared to the London Underground so do use it. Or do what we did, and drink a lot of coffee.

A WEEK IN NEPAL – MOUNTAINS, TEMPLES AND FLUTTERING FLAGS

WAFFLES, WATER AND A LEISURELY WANDER IN BRUGES

The Popstar Bar from Buster + Punch