Little Greene has just announced its latest collaboration, ‘National Trust Papers’, which is an eclectic collection of contemporary wallpapers based on original designs from the National Trust’s revered property portfolio. Comprising 40 colourways over seven designs, the collection represents 200 years of timeless pattern, from the early 18th to the early 20th century. Each wallpaper has been recreated from originals in National Trust properties nationwide, including papers still adorning ancient walls, fragments conserved in archive drawers, and even preserved rolls found in the back of an attic. And if you’re wondering how such traditional styles will work in the contemporary home…

Pomegranate. A rare and very early find, this Baroque design was uncovered by the National Trust, hiding beneath wall-hung tapestries at Erddig in Wales. Block-printed onto handmade paper panels, which would have been nailed directly to the wall (rather than glued), their removal revealed the earliest verified tax-stamp on the reverse. The colourful yellow original has been pared down for one of four tonal colourways. A further three colourways bring versatility to the modern use of this lively paisley design.

Stag Trail. This classic Georgian design can be seen at Greyfriars, a medieval timber house in Worcester. The property’s 20th Century owner, Elsie Moore, acquired some unused rolls from a rectory attic in nearby Pershore, and displayed sections of them as framed panels in her bright yellow dining room. Suspecting that the turquoise pigment in the ground could have been arsenic, she covered the panels in plain brown paper to prevent the unwitting poisoning of either herself or her guests. The holes made by the pins she used can still be seen today, but the paper is, thankfully, (safely) back on show. The scale of the original pattern has been reduced for usability, whilst the four colourways include a nod to the original, a traditional interpretation and more contemporary options. 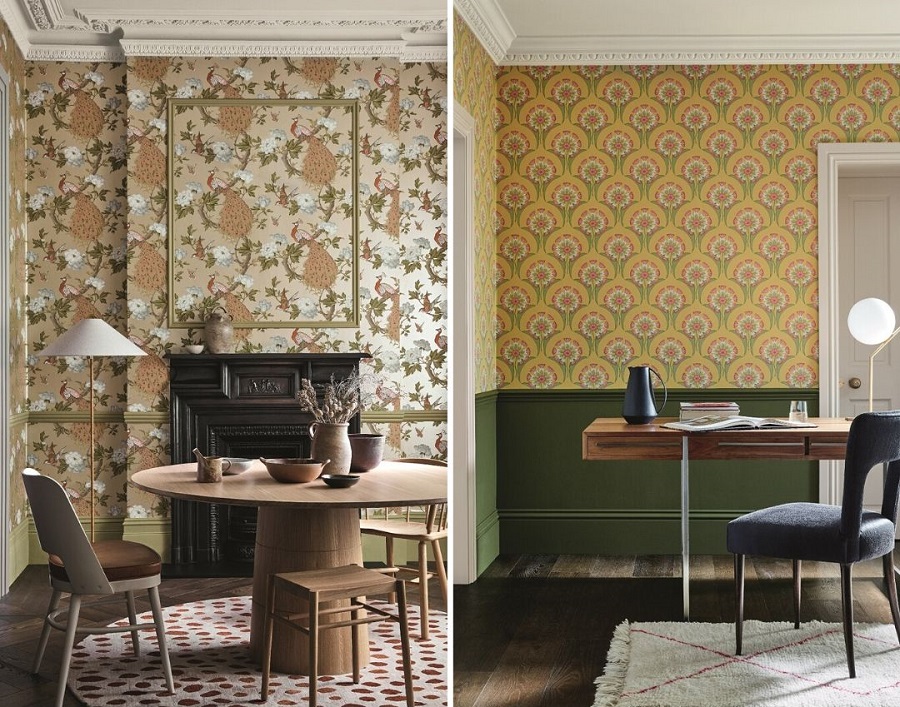 Pavona. This flamboyant, vibrant peacock design is a beautiful example of late-19th century wallpaper printing. Found on a lobby wall at Erddig in Wales, it was hung in the 1870s, and has the painterly finish of a traditional Chinese silk. Showing peacocks perched on branches, accessorised by flowers, leaves and birds, the subject is typical of wallpapers and fabrics produced to satisfy the British interest in Chinese design. Coloured in eight vibrant ways including elegant pale and bolder dark grounds, and even a shimmering gold.

Hencroft. The prolific output of William Morris and the Arts & Crafts movement is widely evident within the National Trust portfolio, not least at Morris’s own London home ‘Red House’. He was a visitor, ‘student’ and 19th Century influencer at the Hencroft Works in Leek, where his friend Thomas Wardle taught and experimented with dyeing fabrics and printing papers with natural inks. This design – a stitched, repeating pattern of stylised cowslips – was found at Wardle’s school of embroidery in Leek, and has been effortlessly translated into a wallpaper design in eight stunning colourways.

Achillea. Originally just a small border design, a fragment of which is kept at Felbrigg Hall in Norfolk, this pattern has been completely transformed in scale. Depicting silhouetted stems and flowerheads of yarrow, or perhaps the locally-abundant marsh sowthistle, the style is distinctly Art Nouveau and the flat colours are typical of a screen-printed design. Besides a radical shift in size, the stunning colour treatment of Achillea’s five modern colourways make this suitable as either a backdrop or focal point for contemporary rooms.

Belton Scenic. The original, much-admired version of this wallpaper can be seen in the Chinese bedroom at Belton House in Lincolnshire. Whilst the paper – a garden party scene, depicted in a combination of printed and hand-painted elements – dates from 1785, it is known to have been hung over 50 years later, in 1840. The original layout, including human figures, exotic birds, awkward scale, quirky perspective and odd details, has been simplified to give space to the spreading bamboo and charming interaction of birds, butterflies and flowers. Available in three colourways, the horizontal pattern repeats over two standard rolls, making the final panel just over three metres in width.

Clutterbuck. Built for a courtier of Henry VIII, Newark Park is a Tudor hunting lodge in the Cotswolds, where just a fragment of this small leaf design survives. The simple pattern featured two varying shades of green on a white satin background, creating the illusion of woven fabric and, interestingly, has been matched to a paper from the clock tower at Hampton Court Palace. The design derives its name from James Clutterbuck, who acquired Newark Park in the mid 18th Century, though this paper is early 19th Century in origin. Five contemporary colourways include softer contrasts and bolder primary shades on off-white, replicating the visual strength of the original design.

IS THERE ANYWHERE YOU CAN’T USE WALLPAPER?

WHICH WALLPAPER AND WHERE TO HANG IT

An Elegant and Eclectic Conversion in a Georgian Townhouse

A Rough Luxe Dining Room and How to Get the Look