The Pros and Cons of Using Artificial Grass in the Garden

It’s been about a year and a half since we had artificial grass installed in the garden. Two summers have since passed and one winter. Which I think makes me a bit of an expert, ha! But first, let me explain why we chose ‘fake’ over ‘real’ in the first place. It was mainly because of the dog. Dogs and lawns really don’t go together. Not if you want a permanently green and moderately manicured patch to admire from inside and out. Storm is not a digger (thank goodness) but he is big, and he produces a lot of pee. So the real lawn we once had was riddled with yellow patches. But. I didn’t want a garden (even though it’s fairly small), that only had hard paving. I really wanted a lovely green patch of lawn and an artificial lawn seemed better than no lawn at all.

Installation for us was very easy. Basically we got a man in. Once he’d leveled and prepared the ground it was just like laying carpet. I admit I wasn’t paying too much attention about what went under the turf, I just bowed to his expert knowledge. He knew we had a dog and I was certain he had taken this into account. Right? I’ll never know until we dig it up. More about this later.

Compared to laying a new grass lawn, artificial grass is quite costly initially. There are the costs of installation to start with, but also high quality artificial turf that will fool your friends and neighbours (at a distance anyway), is not cheap. But ours is guaranteed for 10 years and I’ve read it could last up to 25 years. That might go some way to mitigate the cost of installing it in the first place.

Yes, it’s easy to maintain. There’s no mowing of course, but there’s no need to use fertilizer or nasty chemicals to keep it looking good. I just give it a brush with a stiff broom occasionally to remove fallen leaves and other debris. You’d also think there’s no need to use gallons of water during the long hot summer months either. That’s what other articles will tell you. More about that later.

There’s no denying it looks better than a patchy lawn full of weeds and dog stains. And it always looks that good. Winter or summer, rain or shine, there’s a vivid green patch of grass to rest the eyes on. I love it when the sun is getting lower in the sky and our trees cast shadows. That’s when it looks it’s best. Almost (or even better, may I say) than the real thing. What’s more, the dog doesn’t bring in mud during the winter when he goes out to spend a penny.

And if I was only ever using one of my senses I’d have nothing but good to say about our artificial grass. But I have a nose. And that nose tells me that that lovely looking artificial grass is Storm’s toilet. It’s not even as if he uses the garden to relieve himself that much either. He gets two long walks a day and he seems to be able to hold it for ever. But the once or twice a day he does use the garden is enough to make it a problem.

The first summer was a long hot one, and it was such an issue I resorted to purchasing some cleaner and disinfectant from Amazon. It has to be diluted, sprinkled on the lawn, brushed in, left for a while, and hosed down. So much for not using chemicals. And being maintenance free. It did do the trick but it only lasts for a couple of weeks and then you have to do it again. And it cost about £10 per application for my tiny lawn. (I’ve heard you can use vinegar diluted in water but I have to say I haven’t tried it yet.) So, this year I was determined to cut down on the chemicals and just use the hose instead, but I’m probably using more water than I’d need to keep a real lawn green. And it’s not working.

Now, it may have been the method of installation that is to blame for this, but I have spoken to others with artificial turf and a dog, and they have the same problems. And it’s not something that most articles will tell you. In fact everything else I’ve read says that dogs pee will pass through and just needs to be hosed down, as if it will just disappear. My instincts and my nose are telling me it’s just impregnating whatever material is under the plastic.

Artificial turf is plastic. It’s manufacture is not ecological friendly and somewhere down the line it’s going to end up in landfill. Some are made from recycled materials but they will still end up in landfill. Neither does it cool down the air temperature as a real lawn would. In fact it does the opposite. And if you have visions of the children frolicking barefoot on the lawn, think again. Artificial turf can get so hot it can burn skin and paws. 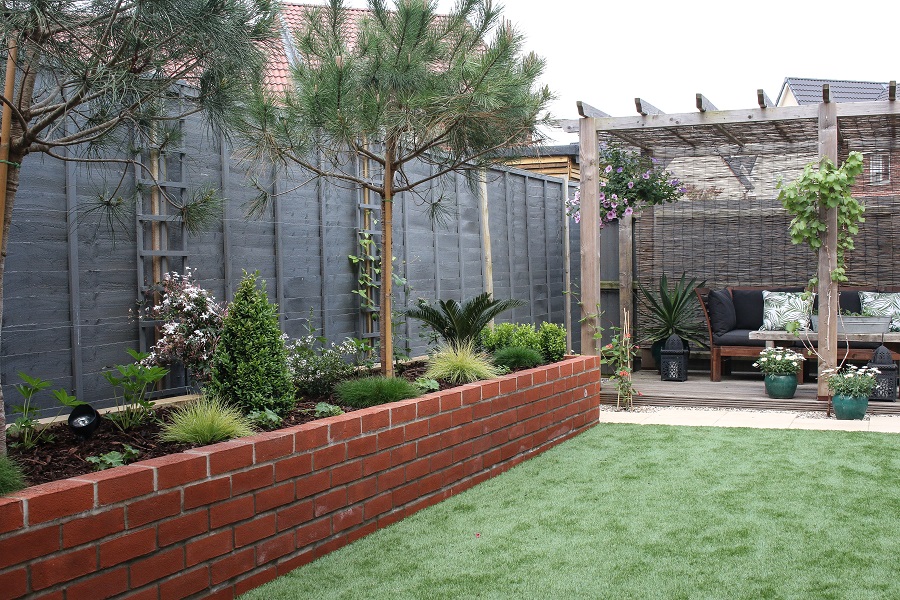 Artificial lawns are a great solution if you have a small patch that just needs a bit of green. Front gardens spring to mind, or small back yards. They look best when professionally laid and when they are surrounded by trees and other ‘real’ vegetation. Otherwise they just look fake. Like a set on a children’s TV programme. Even the most expensive don’t really stand up to close scrutiny. The pile on the longer versions often lies down and they do get dusty. They don’t feel like real grass to walk on and you will never have that wonderful and emotive ‘just mowed the lawn’ fragrance. This is all without questioning whether you can live with the idea of so much plastic going to landfill one day. And if you have a dog? Just don’t.

These photographs were taken last summer just after the garden was completed. It’s grown a lot now – in fact those trees are about a foot higher. Note to self – take more photographs.

THE TREND FOR DARK AND MOODY MOVES INTO THE GARDEN

A Warm and Cosy Bedroom for Autumn – Get The Look