You’d be forgiven for thinking that this man-pad was situated in the American Appalachians or high up in the Swiss Mountains. But no. It’s actually a mews house in the heart of London. And from the outside that’s exactly what it is. A linear, modest and architecturally private 1960’s interpretation of the classic mews house. Inside it’s another story completely. Originally designed by Guy Stansfeld architects, the three bedroom property has been recently refinished by interior designers, Maddux Creative.

The interior now references the iconic American lodges of the late 1960’s with just a touch of Mad Men. It has a decidedly masculine style, with lots of vintage industrial finds mixed in with mid-century furnishings, slate tiling, a massive hunk of tree that is now a coffee table and a haberdashery cabinet that takes centre stage in the dressing room. 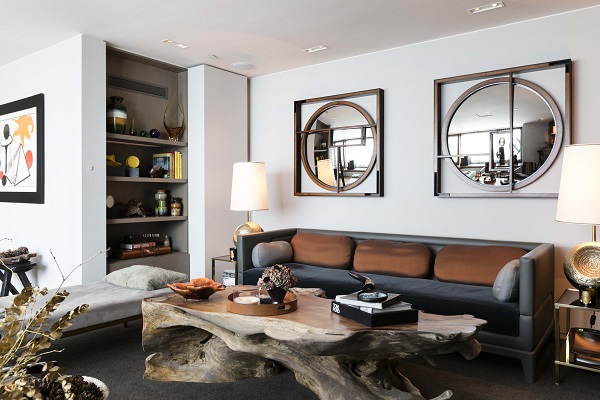 Currently for sale via Domus Nova

A Modern Rustic Kitchen by Artichoke

A Blue and White Bedroom Scheme