If you don’t know it already, I own a cottage in East Ruston. Along with the BF. We purchased it in 2015, renovated it over the course of six months, and now let it out to holiday makers. So we have been visiting this corner of Norfolk for quite a few years now. But we have never visited East Ruston Old Vicarage Garden, until now. And what a treat! In truth I took my sister along as the BF has no interest in anything horticultural (heathen). And as the gardens close their gates at the end of October until Spring, we made it just in the nick of time last weekend.

The magnificent garden that you can visit today is the work and passion of Alan Gray & Grayham Robeson. They bought the Old Vicarage in 1973 along with 2 acres of land. There was no garden at all then. Just knee high shrubby grass. For the first 10 years or so, they were still working in London during the week, and visiting the vicarage at the weekends. (Sounds a bit familiar!) And their passion for gardening began. By the mid 1980’s they had moved to East Ruston permanently, purchased more land, and began gardening in earnest. 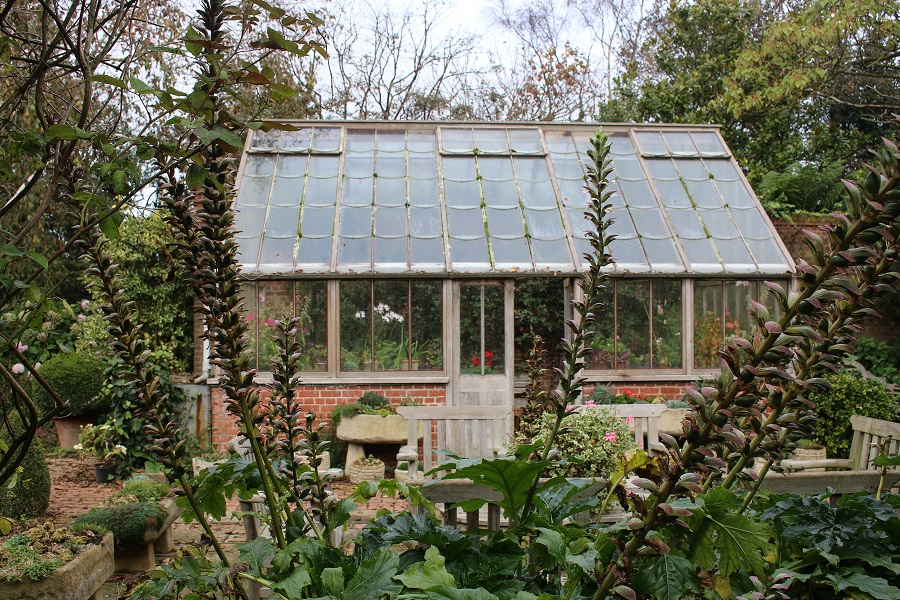 The garden is surrounded by farmland, just 1.5 miles from the North Sea, and the pair were aware early on that a lot of the natural habitat for the wildlife in the area had disappeared. They created hedges, dug ponds, and planted, planted, planted. The hedges also protect the garden against the coastal winds, and the natural microclimate allows plants to thrive that can only grow in sheltered spots.

Today the garden covers an area of some 32 acres and each separate garden room was designed by Alan and Graham. You’ll need a map to explore properly, because arches and gates will lead you off at a tangent. Or maybe that’s the best way to see it. There’s a Dutch Garden full of clipped box and bulbs in Spring. A Rose Garden, an Exotic Garden, a Woodland Garden full of meandering paths, and a Desert Wash Garden that has been designed to resemble parts of Arizona. And many, many more.

We needn’t have worried that mid-October was probably not the best time to visit. A queue at the gate at opening time soon dispelled that notion. There was still more than enough interest to keep us strolling down paths, entering every gate and arch, exploring nooks and crannies, and taking advantage of every strategically placed bench. It was glorious. The Autumn sun appeared from time to time, we wolfed down chocolate and carrot cake from the cafe (visiting gardens gives you an appetite after all), and petted a friendly cat.

Steamy greenhouses were dotted everywhere. Each one an invitation to see what was inside. And wood smoke hung in the air. And every now and again there was a temptation to peek into a window of the house. Naughty I know, but who can resist it?

East Ruston Old Vicarage Garden is open Wednesdays, Thursdays, Fridays, Saturdays, Sundays and Bank Holidays from 12.00 to 5.30pm. This is from early March until the end of October. Admission is £10 for adults and £1 for children. Well worth it, I’d say.

There are two Tearooms, both with wood burning stoves for when it’s chilly outside. It was lovely when we visited so we sat in the Tea Garden. Light lunches are available, along with a large selection of calorie busting cakes. You won’t be able to resist, I promise.

You can also purchase plants to take home. Many of them you won’t find in the garden centre.

OUR LAKESIDE HOLIDAY COTTAGE TO LET IN NORFOLK

Create a Cheery Corner to Beat the Winter Blues

A Bijou Apartment in a Former Art Deco Clothing Factory