Our Country Cottage: The Living/Dining Room

I’ve so much to show you at the cottage. We’ve finished the downstairs now and we’re only a few weeks away from completing the entire house. We’re actually wishing we didn’t have to rent it out and could save it for ourselves. No such luck however. By the time you read this it will be up on the holiday site (I’ll put a link at the bottom of this post in case you’re tempted), and we’ll be eagerly awaiting our first bookings. 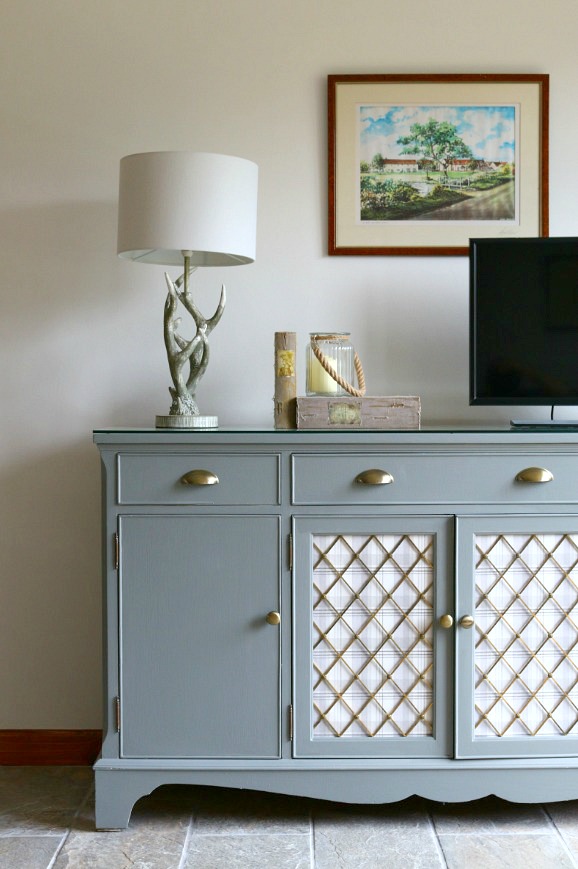 We’ve bought very little new furniture. Apart from two new sofas, everything was either bought with the cottage, transferred from home, or bought second hand. This was partly because we were working to a strict budget, but also because I wanted a homely look and one that was fitting for a modest dwelling in the country. The sideboard above I’ve had for years. It belonged to my sister before me, so it’s now in it’s third home, and it’s gone from dark wood, to painted cream, to it’s current dark grey. It’s actually Farrow and Ball, Pumice. I changed the rambling rose fabric in the doors to grey tartan wallpaper, changed the handles and I think it now looks perfectly at home here.

The coffee table was an Ebay bargain. It’s lovely and solid but it was in pretty poor shape, so the BF restored it and I painted it. The top we treated with wax and it now has a lovely shine. You can’t see the three drawers on the other side but I think it now looks very handsome and much more expensive than it was. (I’m going to change that watercolour above the sofa by the way, it’s way too small, but the map I’m going to hang is waiting for a new frame).

All of the woodwork was varnished so we’ve kept that, but it does provide a nice contrast. Accessories are of the bargain basement kind on the whole. There’s no point in putting expensive knick-knacks in a property that is going to be rented out, but it did need some things to make it look more lived in and homely. All of the cushions are from H&M Home, the tea light holder and faux flowers on the coffee table are from Sainsbury’s, the rug is from Ikea. The only exception to that rule is the faux mimosa on the window-ledge. It was slightly more pricey, I bought it for home but it just seemed to ‘go’ better here. The retro radio I’ve also had for years.

The dining room table and chairs we inherited with the cottage. I’ve painted the legs of the table white and waxed the top and now it looks much better than before. The plate rack I’ve mentioned before and was bought in a local charity shop for £10. It was originally intended to hang in the kitchen but looks better here. The tableware is all from Ikea.

The paint we’ve used throughout on the walls is Dulux, Milky Pail. It’s a lovely off-white with just a hint of stone. This is such a bright room, it seems to benefit from a subtle muted shade on the walls. All of the walls that is, with the exception of the hall stairs and landing. There, we’re going quite dark with Monument Grey, also from Dulux. Partly for practical reasons. I can imagine that guests will not be thinking of our white walls when carrying suitcases up and down stairs. But also because I wanted to make the entrance darkly welcoming so that when you open the door to the living room you are surprised by how bright and airy it is. And then you see the view. 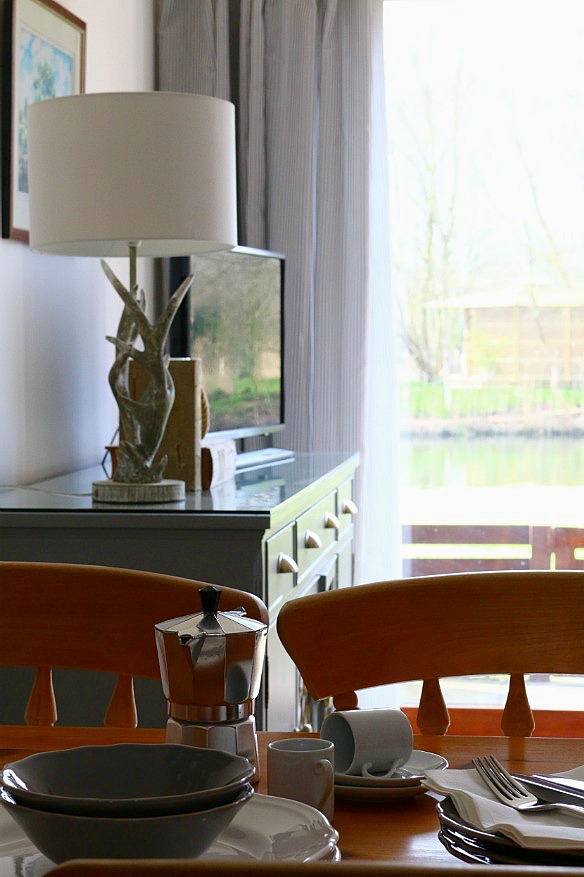 And I couldn’t resist showing you the view from the dining table. We have a small enclosed patio outside, and beyond it is the lake. That structure you can see is on an island and I don’t think I will ever tire of that vista.

The cottage will be available to rent from June onwards here.

The story so far.

Our Country Cottage: The Kitchen

Romance Isn’t Dead in the Garden

The Curio Collection from Cole & Son