I say final reveal, but I know in my heart that a garden is never going to be finished. So this is the final reveal of all the hard landscaping. That really is something we won’t be doing again. It’s taken three years to get this far (we didn’t do much to the garden in the first year of living here); first there was the dining deck, then the pergola build, then I snuck in a little sneaky patio enlargement. Then a while ago I shared the plans for the final phase. And now it’s finished! So back to the plans I made. They were a bit elaborate to be honest and they had to be simplified. Not only because of the cost, but because the garden may possibly have looked a bit overcrowded. But I have to say I’m really happy with how it’s turned out.

So what have we done this time? We’ve continued the path that runs along the side of the garage so that it runs up to the pergola. We also put a couple of rows of paving slabs in front of the pergola itself. There’s now a brick built raised flower bed along the fence. And the lawn has been replaced with artificial turf. I wouldn’t have done this if we didn’t have a dog but it was just too difficult trying to maintain a lush lawn. And I’ve spent far too much money on new plants. I could have phased this out over a few years, but impatient me wants it to look nice NOW. Not in five years time.

I wish we weren’t so overlooked but that’s the reality of living on a housing development. It’s the reason we built the pergola in the first place and used reed screening to create some shade and privacy. When we’re sitting there we don’t feel that we can be seen now. And we also have fairy lights inside too, which makes it a really pretty place to sit after dark. 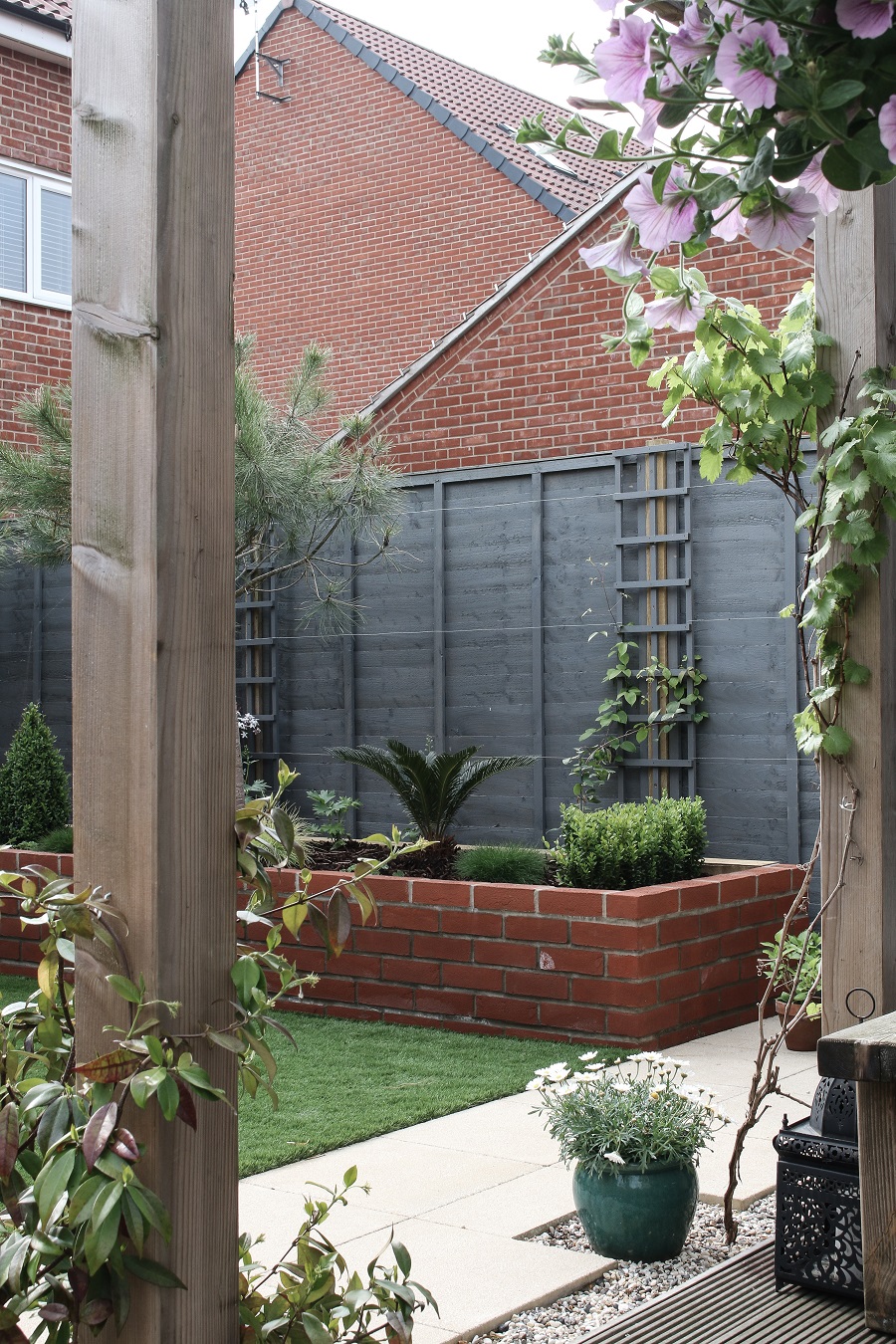 There is a lot of red brick on show it’s true. From all of the surrounding houses and our own house and garage wall. I did consider using something else for the raised bed but in the end decided that a repetition of material was the best way. The fence was painted grey before any other work was done in order to tone down all of the red and brown tones on view from the house. On balance I think it all works.

The two pine trees we had growing in pots either side of the pergola have now been moved to the flower bed. They were getting too big anyway and they provide a big statement in the newly planted bed. An unforeseen bonus has been the shadows they create on the artificial turf, making it look less artificial somehow. Something else was needed for the pergola, so hanging baskets now hang either side.

They look good from the pergola looking towards the dining deck too.

As well as the pine trees in the raised bed I’ve planted climbers, grasses, tree palms, a peony and some other small shrubs. I wanted it to look lush with a variety of greens and texture. They look lovely highlighted against the tree bark chippings.

And it’s all been finished in time to enjoy the best of the summer months. I can’t tell you what a joy it is to walk out in the morning in bare feet. The artificial turf is like a carpet and there are no muddy bits that need outdoor shoes. I can hang the washing out, inspect the plants, play with the dog, and have my morning cuppa in a clean and tidy space. And. The BF has even hung a new garden hose on the wall so that watering the plants every evening is an enjoyable and easy task.

MY HOME – THE HALL AND STAIRS FINAL REVEAL

ESSENTIAL JOBS TO GET THE GARDEN READY FOR SUMMER

10 OF THE BEST GARDEN BENCHES

Coming This Autumn – The New Palazzo Collection From John Lewis