I love a good conversion. You know by now that I am addicted to looking for homes I’ll never inhabit, and pouring over floorplans of houses I cannot afford. This stunning two-bedroom apartment in a former Victorian school building is a case in point. I was attracted at first by the location. Hackney. I know it well. I grew up not far from this neighbourhood and I’ve been watching its gentrification with awe. If only I had stayed put and invested in that area. I might now be able to afford this.

And then I was intrigued by the fact that it’s located in an old school. Buildings that had a former purpose are always so full of history and character. Something that is just missing from new houses. And then I was stunned by its elevation. Just look at that beautiful old brickwork. And gables. And the railings, and symmetry of the windows and roofline! In fact the original building was the West Hackney Parochial School and was built in 1837 as two large halls that housed the girls’ wing to the west and the boys’ wing to the east. The building was later used as a church hall (when the original Robert Smirk designed church was bomb damaged in WW2), a social hall and a snooker house. Most recently, its name had been changed to Grange Hall and it was being used as a warehouse for rare transistors and electrical fittings. And now if you have £800,000 in the bank it can be yours. 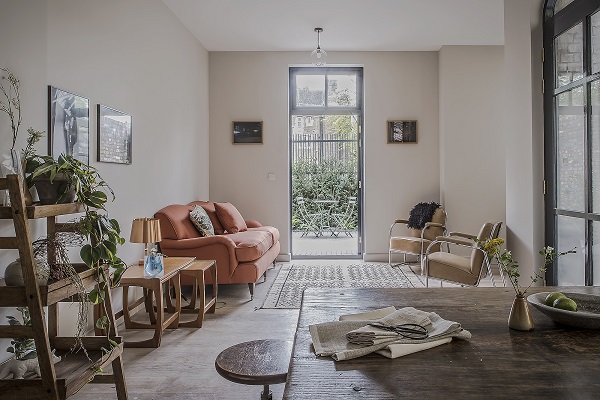 Undeniably the inside is just as stunning. The architects, Nissen Richards, have been careful to retain many stunning original features with a well thought out floorplan over three floors. The main living space and kitchen is at the ground level of the house to make use of the courtyard garden. On the middle floor is a double bedroom and a family bathroom. The second bedroom is on the second floor and has an additional mezzanine platform which would make a lovely office space. For me!

The hand-built British Standard Kitchen is by Plain English and is painted with Little Greene’s ‘Obsidian Green’. The kitchen also features a thick Carrera marble worktop with oversized splash back. Features I would choose myself and that look right at home here.

Flooring throughout is lightly smoked and waxed engineered oak floors with underfloor heating.

Available to buy via Aucoot.

A Bohemian-Inspired Prairie Wagon That Makes a Unique Holiday Home

An Open, Contemporary Kitchen That Makes a Great Party Space