A Week in India – Forts, Palaces and Surprising Spirituality

When family and friends asked me about my trip to India it was hard to describe in just a few sentences. India has the ability to assault all of the senses. Yes it’s dirty, crowded, noisy in places, and suffering from terrible pollution in the cities. But it’s also incredibly colourful, vibrant, atmospheric and at times, spiritual. The memories that will stay with me forever are the beautiful sunsets, the turreted forts rising out of the morning mists, the jewel coloured saris of the women, the spices, the stillness of the water on the Ganges, and the curiosity of the local people at us pale westerners. A week wasn’t really long enough, but it did whet the appetite. India I’ll be back.

Varanasi – The City of Light

Varanasi is one of the holiest cities in India and the ultimate destination for Hindu pilgrims who travel far and wide to experience this spiritual city. It’s overflowing with temples, shrines and devotees. It might not be one of the cleanest cities but it is one of the most amazing. The Old City is a maze of narrow alleyways packed with small shops, stalls, lumbering cows, and white wrapped bodies on the way to their cremation. Because of course, the banks of the Ganges is the scene of bathing, washing, and burning bodies – all rituals that have been performed for centuries. The temples along the river ring to the sound of bells, the smell of incense and the chanting priests, morning and evening. You can’t help but be moved as hundreds of people move towards this scene as the sun goes down.

Most of this can be witnessed from small boats and it’s usual to take a sunrise or sunset cruise. We did both and they are among my highlights. The city seems to fall into the river at places, the steps a cacophony of sound, sights and scavenging animals. In the evening the river sparkles with the magical sight of floating candles.

Sailing on the Ganges

In complete contrast, two days sailing down the Ganges was a welcome respite from the heat and dust. All we had to do was lie back against the cushions, read, chat, listen to music and watch the world go by. A separate boat prepared our meals and we spent the night camping on the sand. Peace and quiet floating through the heart of rural India. A time for reflection. And a time to witness occasionally the splash of a fresh water dolphin. 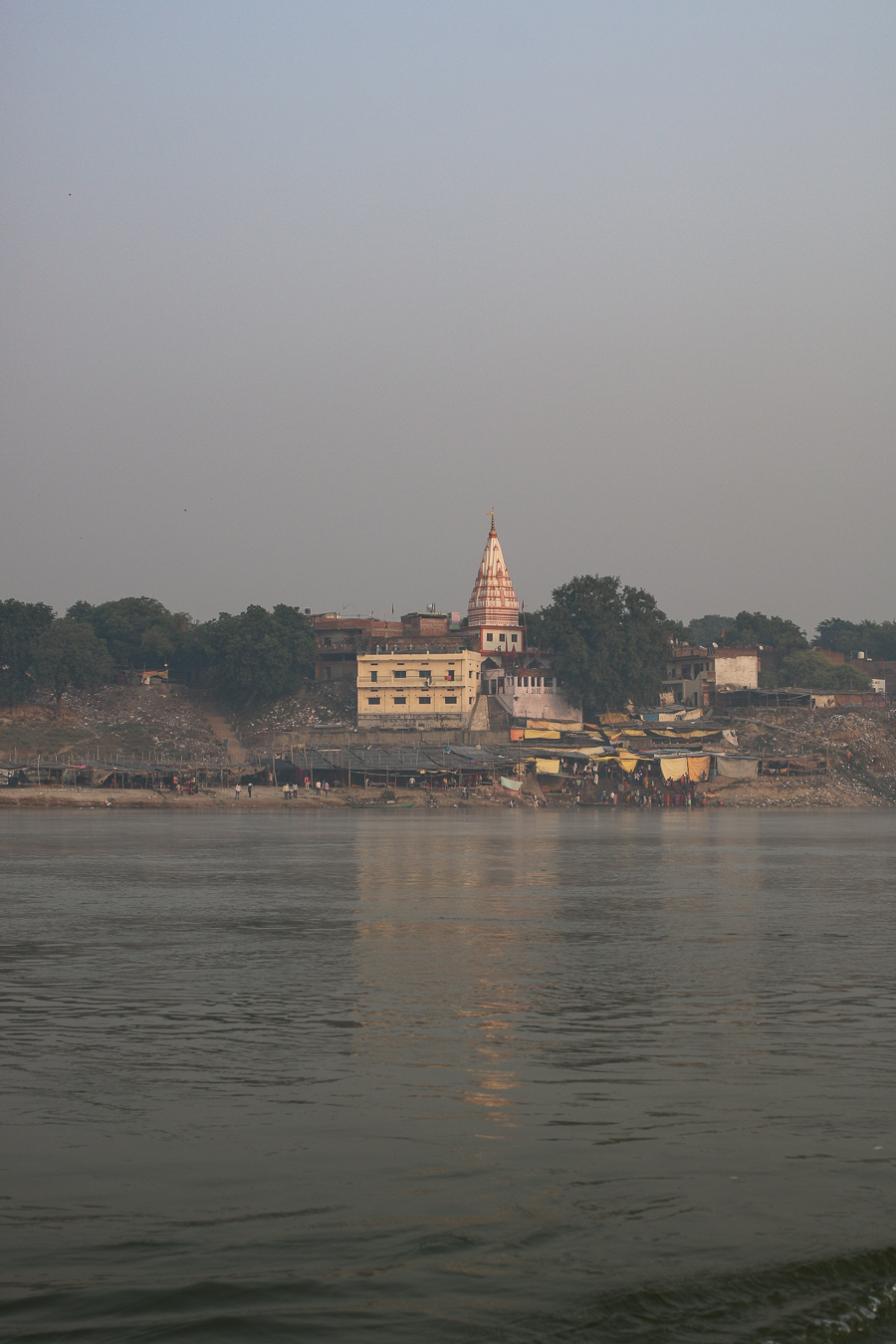 On the River Ganges

Sarnath is located about 15 km from the center of Varanasi and is where Buddha delivered his first sermon. It’s a vast complex of temples, archaeological sites and a museum and if you’re staying in and around Varanasi for long enough it’s definitely a place to visit.

Orchha is simply beautiful. Initially a hunting area, it has changed little over the centuries and despite its small size it’s filled with many beautiful temples and palaces. The most stunning is Orchha Palace itself, with domes built large enough to allow the movement of war elephants. Turrets and towers invite you to explore and from the highest points you can look over the shimmering Betwa River. Nothing matched however, the site of the sun setting behind the roofs of Mughal-influenced Rajput architecture. Orchha is much more laid back and hassle free than other cities and made for a relaxing couple of days.

The Khajuraho Monuments are a group of Hindu and Jain temples. They are one of the UNESCO World Heritage Sites in India and after the Taj Mahal one of the most visited. Each temple is decorated with a profusion of sculptures with intricate details, symbolism and erotic scenes. Set in a verdant green landscape each temple is impressive from a distance, but once you get close enough to inspect the carvings you start to appreciate the amount of work involved in creating them.  Most Khajuraho temples were built between 950 and 1050, and according to records there were 85 temples in all by the 12th century. Of these, only about 25 temples have survived.

Agra is best known for the Taj Mahal. Famous as a monument to love and loss, the 17th Century Taj is a stunning example of Mughal architecture surrounded by trimmed English gardens. The guidebook said “it doesn’t matter who you are, the Taj Mahal will exceed all your expectations”. Never a truer word. We arrived just before sunset and the first glimpse of the light shimmering on marble literally took my breath away. And then tears came. I can’t explain why it moved me, it just did. It doesn’t matter that the gardens are thronged with people, you can’t take your eyes off the sight before you. Don’t bother to go inside the mausoleum, there’s not much to see. Better to spend as much time as possible drinking in all that beauty.

Agra Fort is a maze of buildings, almost forming a city within a city. Walking through courtyard after courtyard of this palatial red-sandstone and marble fortress, you can’t help but be amazed at the scale of it all. It made a fitting penultimate day to the tour.

You might be forgiven for thinking that I spent the entire week visiting temples and palaces. Not so. India is vast and distances are immense. We travelled a lot by train, sometimes overnight, and those experiences were unforgettable. We learned how to cook the local cuisine, haggle in the markets, and appreciate the politeness of the people.

India has warmed my soul.

A WEEK IN NEPAL – MOUNTAINS, TEMPLES AND FLUTTERING FLAGS

THE SMÅLAND REGION OF SWEDEN – FORESTS, FACTORIES AND FURNACES

Kitchen Trends That Will Never Go Out of Style